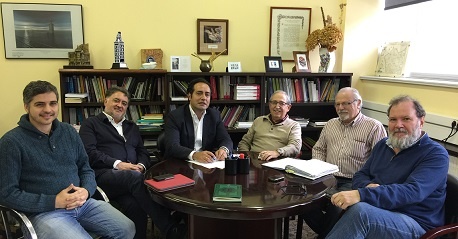 "The Amergin University Institute of Research in Irish Studies" has been founded at University of A Coruña with the intention of promoting academic research on issues concerning Ireland and the teaching of Irish Studies, and providing a source of information on Irish issues with the overall objective of relating such questions to the context of Galicia and Spain as a whole.

The Institute takes its name from Amergin, the legendary druid who, according to the Lebor Gabala Erenn arrived on Irish soil from the north-west of the Iberian peninsula. In choosing this name, the Institute aims to respond to the need to create bridges between different cultures -in this case between Ireland and Galicia.

Irish Studies has always been a field of great interest in Galicia. Since the 19th century Ireland has held an enormous attraction for Galician writers and politicians, and the strength of this influence can still be seen today, albeit for different reasons. It is, therefore, important to provide a platform from which research and information about the situation in various aspects of Irish life and the equivalent in Galicia can be spread.

Apart from the historical connection, the links between Irish letters and the University of A Coruña were firmly bonded with the nomination of Seamus Heaney, Nobel Prize for Literature in 1995, as an Honorary Doctor in June 2000.